Secrets of the Lake Toplitz-See. Austria. 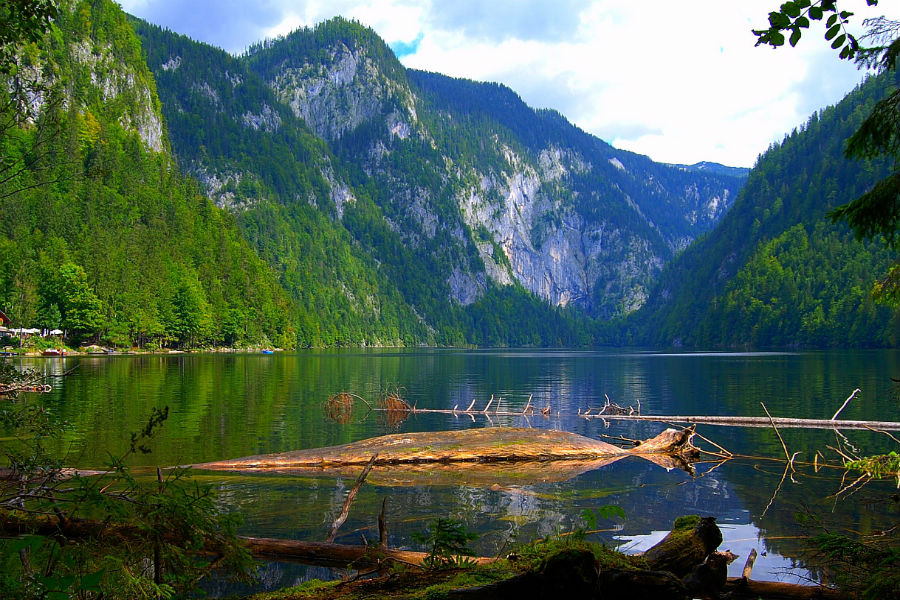 This story began at the end of the Second World War. In March 1945, a group of SS men flooded boxes in the mountainous Austrian lake of Toplitz-See. What was inside became known only after decades. But I'll stick to the chronology of events here.

Perhaps the story with the boxes would have remained forgotten. But in the summer of 1945, local fishermen began to bring in the bank for the exchange of British pounds sterling. Soon it turned out that the bills are not real, but very high quality forgery. After the interrogation of the fishermen, it was found out that the money was found in the water on the bank of the lake Toplits.


This information interested the authorities. In the same year, a group of American and British divers, went to the lake. According to one version, they dived for a long time, but found nothing. On the other - the search stopped immediately after the death of one of the divers. It was alleged that the deceased had the oxygen hose cut at depth. The war just ended, and no one else wanted to risk their lives.ь.


A lake with a "double bottom".

But it's time to tell about the lake itself. Toplitz-Zeye is in the difficult area of the Austrian Alps. It is impossible to reach it even today. You can only get there by foot or by air. The length of the lake is 2 km, width - up to 400 meters. Below the depth of 16 meters in the lake there is no oxygen, and the water becomes completely salty. In this environment, life is almost impossible. Trees falling in the lake in salty water do not sink and do not rot because of the lack of oxygen. In some places the lake has a depth of up to 100 meters. But sunken trees form a second bottom at a depth of 16-20 meters. To carry out search works, in such an environment, is very dangerous.


Treasures of the Third Reich.

Some researchers argue that at the end of World War II, the treasures of the Third Reich disappeared without a trace. Information about all values is not available to anyone. But the press cited several details. In particular, 50 boxes of the Reichsbank of Berlin, about 22 cans of gold by Otto Skorzeny, and also about 5 kg of Kaltenbrunner diamonds were mentioned. You can add here, the missing collection of postage stamps, jewelry and old coins. Therefore, information about the gold bullion drowned by the SS at the bottom of the lake has the right to life. And since any treasure must be guarded by someone, that is, rumors about this. It is alleged that the burial on Lake Toplitz was guarded by former SS men. In any case, the events around the lake confirm this information.

In February 1946 two engineers from Linz arrived - the Austrians Helmut Mayer and Ludwig Pichler. The engineers were experienced climbers. They were going to climb Mount Rauhfang over Toplitz-See. No one saw them alive. A month later, searches were organized. As a result, a hut of snow was found in the mountains, where the corpses of Mayer and Pichler lay. Pichler's stomach was ripped open, and his stomach was taken out and stuffed into his backpack. The investigation into the incident led to nothing. But it turned out interesting details from the biography of engineers. It turned out that during the war, Mayer and Pichler took part in tests of secret weapons on the banks of the Toplitz-See.


Meanwhile, the "tourists" continued to come to the lake. In 1947, in one of them, the former adjutant Bormann was identified. He was sent to camp. He did not say anything about the reasons for his visit to the shores of the lake. In August 1950, the Hamburg engineer Keller came to Lake Toplitz with professional climber Gert Gerens. The latter quickly died. According to Keller, the climber broke off the safety rope and fell into the abyss. Relatives of the climber conducted their own investigation. As a result, they found out that Keller during the war was the head of the secret submarine base and supervised the "pilot station" in Toplitz-See. Approximately at the same time three French geologists arrived and stopped at a small local hotel on the shore of the lake. Eight days later they departed, loading four heavy boxes into the car. When the owner of the hotel came to the bank to change the money received from the "scientists", it turned out, that the bills are false. In 1952 two unknown people with gunshot heads were found on the shore of the lake. The police did not have time to investigate this case, as on the other bank was found a dead geography teacher from France Jean de Soz. Not far from the corpse, a fresh deep pit was found. When it began to fall asleep, it turned out that there was not enough land to dig a hole. It is very likely that the Frenchman found something and paid for it with life.


Expedition of the journal "Stern"

In 1959, the West German magazine "Stern" decided to deal with the mysteries of Toplitz. The team of scuba divers explored the bottom of the lake for five weeks. Fifteen wooden and iron boxes were raised. In them were fake English banknotes of 1935-1937, for the sum of 55 thousand pounds sterling. And in one box they found the documents of the Main Directorate of Imperial Security (RSHA). Among the latter were lists of prisoners of concentration camps. The expedition was going to pick up dozens of boxes. But from the editorial office of the journal came a telegram with a demand to immediately stop the pods and go back. There were rumors that the owners of Stern paid a very large sum to stop the search. Representatives of the Austrian Ministry of Internal Affairs officially stated that in the boxes found by the Stern expedition, there were "exceptionally fake bank notes of British pounds".

In the summer of 1963 there was another tragic case with a fatal outcome. Three West German tourists settled in Altaus See. A few days later, one of them died in Toplitz-See. In 1963, Austrian divers found a depth of seventy-nine meters of a German aircraft. What was in it, it was not possible to find out. This expedition was suddenly stopped. And on October 6, 1963, the scuba diver Alfred Egner was found dead. The circumstances of his death were very suspicious, but the investigation, again gave nothing. In November 1963, another treasure hunter drowned in the nearby Alat lake. After these cases, diving to the bottom of the lake was officially banned by the Austrian authorities. The deaths on the lake stopped.

Hans Fricke went to Toplitz-zee as a biologist in 1983. The purpose of his expedition was to study flora and fauna. Fricke heard about the death of search engines. But his expedition was prepared better than all the previous ones. At his disposal was a submarine. But already after the first dives, Fricke discovered at the bottom of Lake Toplitz remnants of military equipment during the Second World War. The remains of a seaplane, which the Austrian inroads mentioned in 1963, were discovered. With the help of Austrian scavengers, the sapper Fricke picked up pieces of rockets, bombs, mines and pontoons. It turned out that the ammunition was intended for systems of naval weapons.


The finds so fascinated Hans Fricke that he began to study history. It turned out that during the war in the vicinity of the lake there was an institute for the development of weapons for submarines. And banknotes were printed to undermine the British economy. The institute and counterfeit money had one fate - at the end of the war they were drowned in the lake, "the researcher said. Among his findings was a rocket, flying out from under the water, and striking ground targets.


Also, Fricke found out where the printing house was located for printing counterfeit money. Her address was the death camp of Sachsenhausen. Fascists destroyed in him more than one hundred thousand people. In it there was a laboratory for the production of counterfeit bills. The secret production received the coded name "Operation Bernhard." According to some reports, 12 experts - counterfeiters, were awarded fascist medals.

The mystery of the mountain lake Toplitz-See again attracted attention in 2001. On its bottom, the next, thirteenth expedition was carried out for the last 50 years.


This time, the most advanced equipment was used - the American deepwater bathyscaphe "Phantom". The latter was used to search for the wreckage of the space shuttle Challenger, which exploded over the Atlantic in January 1986. Team "Phantom" signed a contract with the television company CBS and the center of Simon Wiesenthal in Los Angeles.

The first dives immediately brought results. With the help of robots, it was possible to hook and lift to the surface nine galvanized boxes, weighing about 100 kg each. After the ascent, hundreds of tourists were observed, for whom a huge raft was built. But the sensation did not happen. First, the coast, where the mysterious cargo was delivered, was cordoned off by the police. And then the boxes were loaded into armored trucks and sent to Salzburg under escort. They were promised to tell about their contents "after the autopsy". But promises remained promises. Although there is an opinion that in the boxes there were numbers of accounts of Hitler's elite in Swiss banks. And this is exactly the information that the center of Wiesenthal has been looking for for decades.